The Dodgers’ soft underbelly, the one glaring question mark for the consensus World Series favorites, was exposed on a chilly Wednesday afternoon inside an outdated concrete mass against the only team left in the majors searching for a win in 2021.

Kenley Jansen was tasked to protect a one-run lead in the ninth inning and complete the Dodgers’ seven-game, season-opening trip. A save would’ve extended the Dodgers’ winning streak to six games, but he failed to do his job in the Dodger’ 4-3 loss to the Oakland Athletics in 10 innings at RingCentral Coliseum.

Jansen looked uncomfortable pitching on consecutive days for the first time this season. His velocity was down. His command was erratic as he threw 13 of his 22 pitches for balls. Matt Chapman welcomed him with a loud leadoff single and scored the tying run on Elvis Andrus’ sacrifice fly.

Jansen survived the inning, but the Athletics, who were outscored 50-13 entering Wednesday, won the game in the 10th on Mitch Moreland’s walk-off single against Jimmy Nelson.

The bullpen’s letdown — combined with the offense going 2 for 21 with runners in scoring position — wasted Trevor Bauer’s strong performance in his second start as a Dodger and dropped the club to 5-2 heading into their home opener Friday against the Washington Nationals.

“That’s just uncharacteristic for him to not have the command like that,” Dodgers manager Dave Roberts said of Jansen. “There were some misfires in there, some spiked fastballs that typically doesn’t happen with him. We’ll dig into it.”

The Dodgers weren’t at full strength again, this time missing former MVPs Cody Bellinger and Mookie Betts. Bellinger’s absence from the lineup was expected after getting spiked on his calf Monday. Betts’ exclusion was not.

For a couple of hours, the reason for the $365-million star right fielder’s omission was unknown. Roberts didn’t address the media before the game and the club didn’t disclose any information. At 12:02 p.m., 35 minutes before first pitch, the Dodgers announced the problem: a stiff lower back.

After the game, Roberts said he expects Betts to play Friday. Bellinger, however, isn’t expected to play and a stint on the injured list remains a possibility.

Bauer held the Athletics (1-6) to two runs on three hits across 6 2/3 innings. He compiled 10 strikeouts for the second straight start, walked one, and threw 110 pitches.

Oakland tallied its first run when Ramón Laureano was hit by a pitch to lead off the fourth inning, stole second base, stole third base, and scored on a wild pitch.

Otherwise, Bauer gave up one hit in six innings — after six no-hit innings in his debut — before yielding a home run in the seventh. Through two starts, hitters are one for 38 against Bauer in the first six innings and five for nine in the seventh.

“Mixed bag,” Bauer said. “I thought my stuff was really good. I made some between-inning adjustments, but was behind on a lot of counts 1-0, 2-0. So, I have to clean that up.”

Not all injury developments were negative for the Dodgers. Chris Taylor returned to the lineup after getting hit by a pitch on the left elbow Monday. He played center field in Bellinger’s place and led off in Betts’ place.

At the plate, he helped put Athletics left-hander Jesús Luzardo on the ropes in the first inning with a walk. He scored on AJ Pollock’s two-out single. Luzardo walked Max Muncy for his third walk of the inning to load the bases as former Dodger Adam Kolarek began warming.

But Austin Barnes, the Dodgers’ designated hitter, flied out to end the inning and the Dodgers squandered the opportunity to bury Luzardo, who threw 35 pitches but surrendered just one run.

Luzardo kept the Dodgers off the board from there until the sixth inning. Max Muncy worked a one-out walk and Barnes singled to chase Luzardo. Kolarek was summoned to face Gavin Lux, who advanced the runners with a groundout to first base.

That brought up Zach McKinstry, the No. 9 hitter and Betts’ replacement in right field, with two outs and the score tied. The rookie utilityman noticed the infield was shifted and dropped a bunt down the third-base line to create some chaos.

Athletics third baseman Matt Chapman fielded the ball on the run as Barnes sprinted to third base behind him and Muncy raced home. Barnes overslid the bag and was tagged out to end the inning, but Muncy crossed home plate first, giving the Dodgers the lead.

“That was on his own,” Roberts said. “Very heads-up play.”

Justin Turner’s RBI double off Sergio Romo in the seventh inning gave the Dodgers a two-run lead until Matt Chapman led off the bottom of the inning with a solo home run against Bauer.

The one-run edge lasted until Jansen took the mound in the ninth and the Dodgers’ one major potential flaw became evident, souring the end of a successful trip and ultimately costing them a win against a floundering club. 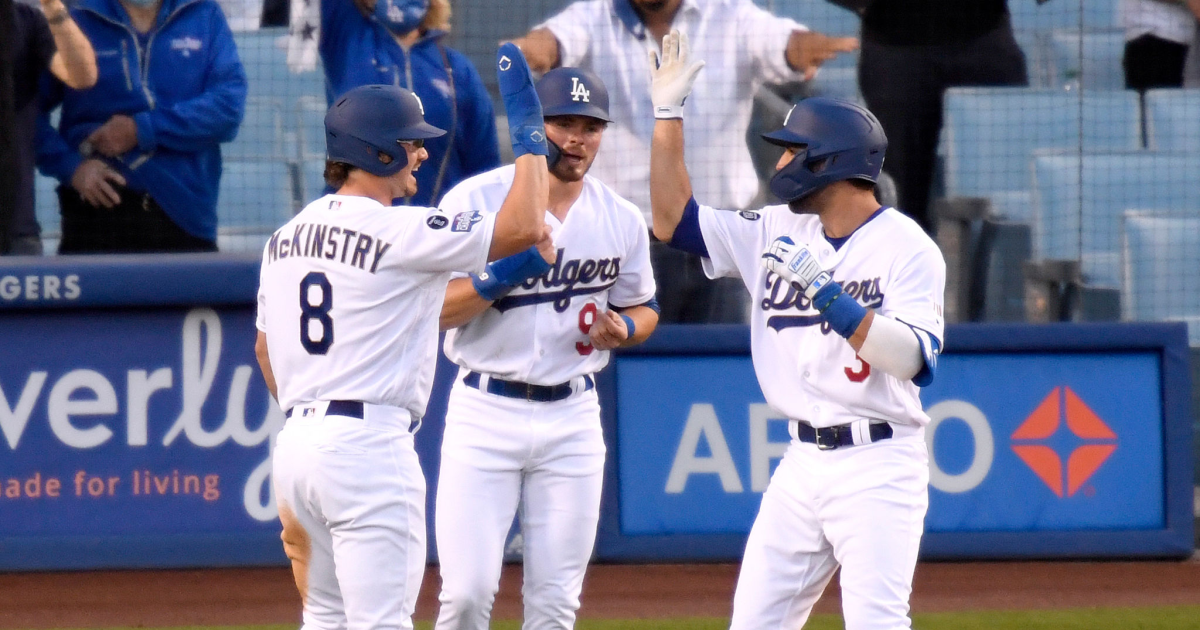