Politicians and judges will be subject to the same sexual harassment laws as the wider population under major workplace reforms announced by the federal government.

Sexual harassment would officially become a grounds for dismissal under recommendations backed by the Australian government in its long-awaited response to the [email protected] report.

Prime Minister Scott Morrison on Thursday announced his government would accept all 55 recommendations of the report into workplace harassment either wholly, in part or in principle.

The report was the culmination of an 18-month inquiry conducted by Sex Discrimination Commissioner Kate Jenkins examining the nature and prevalence of sexual harassment in Australian workplaces.

Ms Jenkins handed the report to the government in January last year with the government’s delayed response to its findings recently becoming a point of scrutiny.

Mr Morrison said the government’s response to the report was about changing Australian workplaces to keep all people safe.

“Sexual harassment is unacceptable,” he told reporters in Canberra on Thursday.

“It’s not only immoral and despicable and even criminal, but particularly in the context of the [email protected] report, it denies Australians, especially women, not just their personal security but their economic security.”

He described this behaviour as “immoral” and despicable”, saying it risks denying women both personal and economic security.

“It’s important that as we address these issues, that we do it not in a way that sets Australians against each other,” he said.

Mr Morrison and Attorney General Michaelia Cash addressed the media on Thursday to unveil the government’s response to the report.

Senator Cash said the report had found frameworks for addressing workplace harassment were both “complex” and “difficult to navigate” for workers and employers.

She said the government’s response wanted to “simplify” and “strengthen” the legal framework around addressing concerns over workplace harassment.

“Our aim is to reduce complexity, but also strengthen the national framework for addressing sexual harassment,” she told reporters.

Attorney-General Michaelia Cash at a press conference at Parliament House in Canberra.

The definition of serious misconduct across all workplaces would also be changed to include sexual harassment, meaning this would become a valid reason for dismissal.

Under proposed reforms, judges and politicians would be subject to the same sexual harassment laws as the wider population. Previously they had been exempt from these provisions.

Under human rights laws, the scope for complaints would be extended to two years, from six months, to give victims more time to come forward.

Ms Cash said the government intended to implement a range of “legislative and regulatory reforms” to strengthen the nation’s framework to addressing sexual harassment.

The government’s response to the inquiry comes as it faces enormous pressure to address women’s safety after Canberra was rocked by recent rape and sexual harassment allegations.

The timing of the government’s response also appears linked to its attempt to reset its approach to women’s issues amid the political fallout over these concerns.

Mr Morrison said the events of recent months had reinforced the need to act on concerns around workplace and sexual harassment.

“It all starts with disrespect,” he said.

“That’s where it starts and I would argue not just disrespect towards women, disrespect full stop.”

The Sex Discrimination Commissioner’s report found that 39 per cent of women and 26 per cent of men had recently experienced sexual harassment in the work place.

“This is unacceptable,” Ms Cash said. 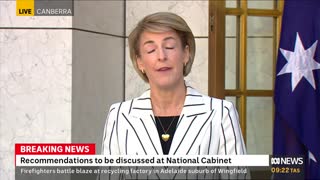 “Our response, what we do is set out our long-term commitments to preventing and addressing sexual harassment in the work place.”

Mr Morrison said the government had responded last year to nine of the 20 recommendations pertaining to federal responsibilities.

The federal government intends to work in consultation with states and territories in relation to responding to other recommendations within the report.

A number of legislative changes would be required to enforce the reforms.

Mr Morrison said he was committed to taking action towards this by at least the end of June.